Less than two weeks to go!

Baby #2 is due to make his or her appearance in 11 days (key word is "due"... it could be any day!)... I said to James 2 days ago, "Ok, I'm officially sick of being pregnant!" I'm not nearly as big as I was with Will, and thankfully no sciatica nerve pain down my leg like I had with him near the end, but this baby is active! Every time I eat anything, my stomach erupts with golf balls popping out under my ribs and a big "bum lump" sliding around the front... instead of staying put in the "ideal" birth position (like my compliant little son), this one likes to flop back and forth every couple days or so-- great for labor nerves (less with this one, but still present)... serious judo practice starts at 10pm, right when I lie down to sleep... I keep thinking, who IS this person?

Will continues to be totally into every sport he can figure out... the latest developments are drop-kicking the rugby ball ("dop-kick, Mommy!") and using his tennis racket to pull the ball towards him from under a table (Daddy taught him that one). Rain or shine, his favorite place to be is outside, playing with his favorite object: a ball. 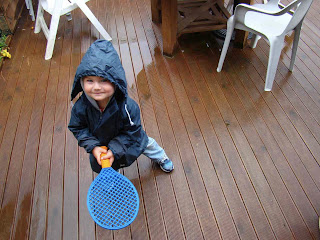 Yesterday he counted all the way to 10 (with a little help) on Skype for Grandma Ros! That achievement looks so basic and normal when I write it-- but there's no explaining how amazing it feels to listen to your son pronounce all the numbers in the right order, in his little baby voice! "One... toooo... fwee... fowuh... fife... six... seh-ven... " He likes me to sing songs to him when we're driving anywhere in the car, and every time I stop he says "How'bout...?" or "An den...?" He's started singing along with the ABC song-- he finishes the end of each phrase. "...ehf, gee....mno, pee... dubble-yoo...wy, zee... ay bee seees... meee!" His favorite colors to draw with at the moment are black and brown-- maybe he likes the contrast? Too bad they also show up the best on shirts... thank God for washable markers. He's really good at having manners - "sanks, Mom!" and "bress you!" and "moah peez!" and will even give goodbye hugs and say hello and goodbye to people he's just met (which they love).

AND this placid easy-going (almost two-year-old) son decided a week ago that, all of a sudden, the most excruciating thing he can think of to do is to take off all his clothes and get into the bath. Never mind that he spent the whole summer loving swimming, loving water... never mind that most kids LOVE taking off their clothes... take him into the bathroom and show him the bath, and he gets this look in his eye, and squeezes as close to the door as he can get.

"No, ON! ON!" he says very decisively, if I suggest taking off an item of clothing.

"Pants first, Will, or sweatshirt?"

"Look, Mommy's taking off her shoes... how many toes does Mommy have? Shall we count your toes?"

(Getting more distressed) "NO! ON!"

Inevitably it boils down to a battle involving all THREE of us-- James and I trading off tugging limbs out (Will is meanwhile flexing his feet, arching his back, clenching his elbows and making fists on the end of his sleeves, screaming like we're murdering him)... pants, socks, diaper, sweatshirt, long-sleeve shirt, t-shirt, undershirt (it's supposed to be spring here but it's still freezing)... somewhere in the middle, James and I both burst out laughing-- this is completely irrational.

Feeling guilty for laughing at our miserable son, and slightly nervous about what sort of very real fears he might be having that he can't tell us about, into the bath he goes... and after about one minute, he's asking for the boat and playing away, tears forgotten. He even turned around, pointed at me and said, "Out!" (Daddy is the usual bath manager-- maid dismissed!)

Any ideas what this is all about? Has anybody else's child suddenly developed out of the blue an irrational dislike of removing clothing?

In other news, Will is sleeping in a "big boy bed" now! Several days ago, he decided he wanted to take his nap in one of the single beds in the room he's using. So we tucked him in, piled pillows around the edges, and prayed he wouldn't fall out... here's what we saw when we checked on him ten minutes later: 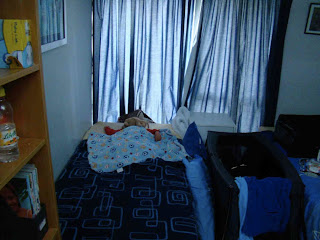 (discarded portacot next to the bed) 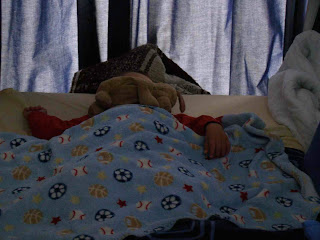 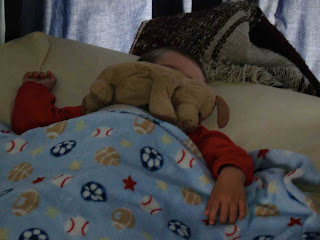 (He absolutely LOVES that dog)

So now he's slept 4 nights in the single bed, without wanting to go back to his portacot... The first night he woke up twice looking for his dog (which had fallen down the side), so the next night we pushed the top mattress flush against the window at the head, and made sure the cracks were all stuffed with pillows.

Night #3 I was going to the bathroom next door at about 10pm, after he'd been asleep for a couple hours, and I heard a thump on the wall... going in, I found him on his hands and knees pushing his head up into the corner, really disoriented. I sat him up and cuddled him, and gave him his dog, and after a few minutes he laid back down again.

Last night I checked on him at 2am (after a potty stop), and he was in exactly the same position we'd put him down in: on his back, in the exact middle of the bed, under the covers, holding his dog. What a model child. Here's hoping for the next one... (yeah, right-- I think we're in for it this time)