too sweet for words

From looking at my blog page, you would think making an Advent Calendar is a 24/7 activity!
I do have other things happening in my life…
Yesterday, my house helper called to say she was busy tomorrow morning and could she come that afternoon instead?  I said ok, inwardly cringing at the thought of giving up my precious afternoon quiet time to supervise housework… and then I realize that if I’m going to see a friend who’s been on my heart for weeks, that would be the time.  I was planning to go the day before, but Will came down with a bad cold.  I couldn’t take him out in the cold and wet, and my house helper is my only source of childcare at the moment.
When my helper arrived, Ben had just woken up and Will was still sleeping.  I put Sesame Street on for Ben, threw some snacks on the counter for when Will woke up, donned raincoat and boots and headed out into the rainy, gray afternoon.  I was carrying a bag of hand-me-down clothes in one hand and my umbrella in the other, slogging through slimy, muddy puddles, even more determined to make this visit after calling my friend and learning that her baby was sick.  It wasn’t until half-way there that I realized God was giving me my 20-minute daily walk that I had slept through this morning!  Full of thanks, I thought back over the story of this baby…
Ada is a miracle baby.  My friend had been pregnant twice before, and lost both babies to late-term miscarriages.  The second time, her waters broke at 8 months but her body didn’t go into labor, and because they didn’t have enough money to go into the big city for a vacuum extraction, her baby died in her womb.  She said she almost went mad with grief.
They adopted a beautiful little boy a few weeks after he was born, and he’s now just a little younger than William.  Last summer, she got clearance from her doctor to start trying again.  In August, she told me she was pregnant.  We cried together.  I laid my hands on her stomach and prayed protection over the precious little life.
Ada was breach during her whole ninth month.  On my birthday, May 3, I went over to my friend’s house to take her a miniature rose plant, and asked her how she was doing.  She looked worried.  She was a week from her due date, and Ada was still breach.  I asked if I could pray.  I laid my hands on her tummy, felt the baby kick, and asked Jesus to turn the baby around and deliver it normally.
Two nights later, my friend’s waters broke, and she went to the hospital, waiting an agonizing 4 hours before her contractions started… the worst kind of dejavu.  But by noon the next day, little Ada was born, healthy and naturally.  Headfirst.
When I called my friend’s mother the next day to arrange a hospital visit, she immediately thanked me for praying and gave glory to God for turning Ada around.  She still calls me her American daughter.
This is the baby I was going to see, now six months old… I walk past the soccer field, soggy in the rain, two more turns on slippery streets, past the green gate painted with Snow White, into my friend’s driveway.
And then she’s kissing me with warm cheeks, bringing me inside, taking my umbrella and my coat, and I’m relishing speaking this language, being welcomed into her warm house, into her warm heart.
And here is her sweet baby, suffering from a winter virus, beautiful eyes a bit glassy with fever, runny nose, sore throat, a bit rashy… I translate the directions on the bottle of infant Tylenol I brought, and we give her a small dose.  Ten minutes later, her fever has dropped and she’s nursing peacefully.  We stroke her soft cheeks, and call her God’s gift to us.  I pray, laying my hands on her fuzzy black hair and asking God for peace and healing, and for her mother too.  I pray the most naturally and easily in this language when I’m with this particular friend.  I sense she is very close to the kingdom of God.
I pull out the clothes I brought and hold them up to her three-year-old son.  He likes the red Nike sweatshirt.  I hand him a red race-car that Will and Ben wanted him to have, and he starts driving it, making vrooming noises (the same in any language).
A horn beeps outside: James, on his way home from work, coming to pick me up so I don’t have to walk home in the rain.  More warm-cheeked kisses with my friend, she bundles me up in my coat and hat, and says “Wait!  I haven’t given you anything!  You’re leaving dry-handed!  That won’t do” and dashes into the back of her house, returning with a huge green and gold pumpkin which she presses into my hands.  I laugh, thank her, run through the rain to the warm car.
James and I drive home, just the two of us, relishing the unexpected gift of a few minutes together without kids.  I breathe a sigh of relief.  I’ve been to see my sweet friend, I’ve checked on her precious baby, I’ve unburdened  my heart, I’ve been Jesus’ hands and feet.


More than that, I’ve spent time with someone I love, who loves me.


And the pleasure of real friendship in this place, in this language, is too sweet for words.
Posted by Carolyn at 4:37 PM 0 comments

Links to this post
Labels: cross-cultural living, the art of sojourning

a conversation about stress

After a day playing with friends yesterday, the boys received a new toy.  This morning they were attempting to play with it together in the living room, and William came to me in frustration (peeking through the crack in the bathroom door - why do issues always crop up when I’m on the pot?)
Will, his little face pressed to the crack: “Mom, when Benjamin says no, it stresses me out.”
What?!?  Where did he hear that?  Must’ve been from his friends yesterday….
“Will, where did you learn how to say that?”
“From you!”
::sigh::  Convicted.
“William, let me tell you something.  If we believe in Jesus, we really should never get stressed out about anything.  If you say Benjamin is stressing you out, what you really mean is he’s not doing what you want him to do.  Right?”
-nods-
“Well, When Mommy says I get stressed out, I’m really just not trusting Jesus.  So… you don’t need to say that, and Mommy will try not to say that any more either.”
Mental note: intentionally let my trust in Jesus spill over into my words, so I verbalize trust to my kids instead of stress! 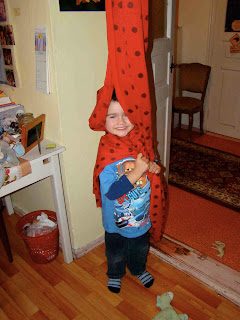 of hot showers, oranges and grace

(Written on Monday... it's taken three whole days of trying to post it!  Thank you for grace!)
I haven’t had a hot shower in almost a week.  In some parts of the world, that’s nothing - people only get a shower once a month, if that.  In my former American life, however, a week between showers would have been shocking - I showered every day as a matter of course.  In our life here in Central Asia, a week without a shower is not so shocking, but considering what else has been happening lately, not having the comfort of a hot shower has felt like the straw that broke the camel’s back.
One reason we haven’t been taking showers is that our bathroom drain has been blocked for almost 2 weeks.  The drain for the bathroom in this new house is right in the middle of the floor: I stick the washing machine water tube straight into it, and the bathtub drains into the same pipe (under the floor).  This drainage pipe has been blocked for almost two weeks, which means any time we take a shower or do a load of laundry, the entire bathroom floor becomes a scummy lake of dirty water which takes several hours to subside and leaves a disgusting film of grunge behind. 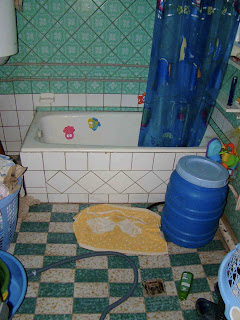 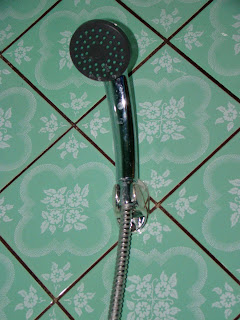 I spring into action.  I hastily call instructions to the boys to keep eating oranges (they’re amazingly settled this morning after all that sleep, and being so affectionate with each other - more grace), race to the bedroom to grab my clothes, race back to the bathroom calling to Will to say “Mommy’s busy!” if anyone comes to the house, and close the bathroom door behind me. 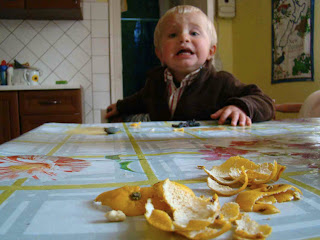 And I have my first hot shower in almost a week - my first in almost two weeks without the floor flooding, thanks to the persistence of my wonderful husband...  And even though I’m soaping and scrubbing and sudsing my hair frantically because I know the water could go off any second, the whole time I’m rejoicing.  Grace, grace, grace. 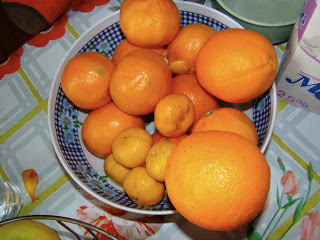 And at the end of all the necessary scrubs, lo and behold, the water is still running and still hot, and so I stand under it for a long, glorious, extra minute or two, breathing in the warm steam of sheer grace.  Ahhhh.  Bliss. 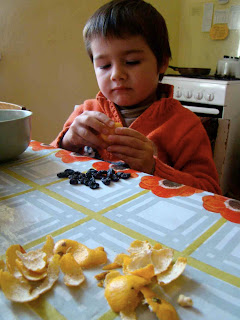 A power-less, light-less, heat-less house, filled with grace.  And the smell of oranges.
So thankful:
For my wonderful husband, and his grace towards me
For oatmeal
For a house with a fireplace
For a warm fire
For our Russian svyetchi brother who is committed to making our house safe
For a wonderful time of worship and fellowship with our workmates yesterday
For settled, rested, happy sons
For oranges, and the time it takes 4 small hands to peel them (the length of a shower!)
For hot showers,
running water,
and unexpected grace.
Posted by Carolyn at 10:48 PM 2 comments