of carpets and broken hearts {a Good Friday story} 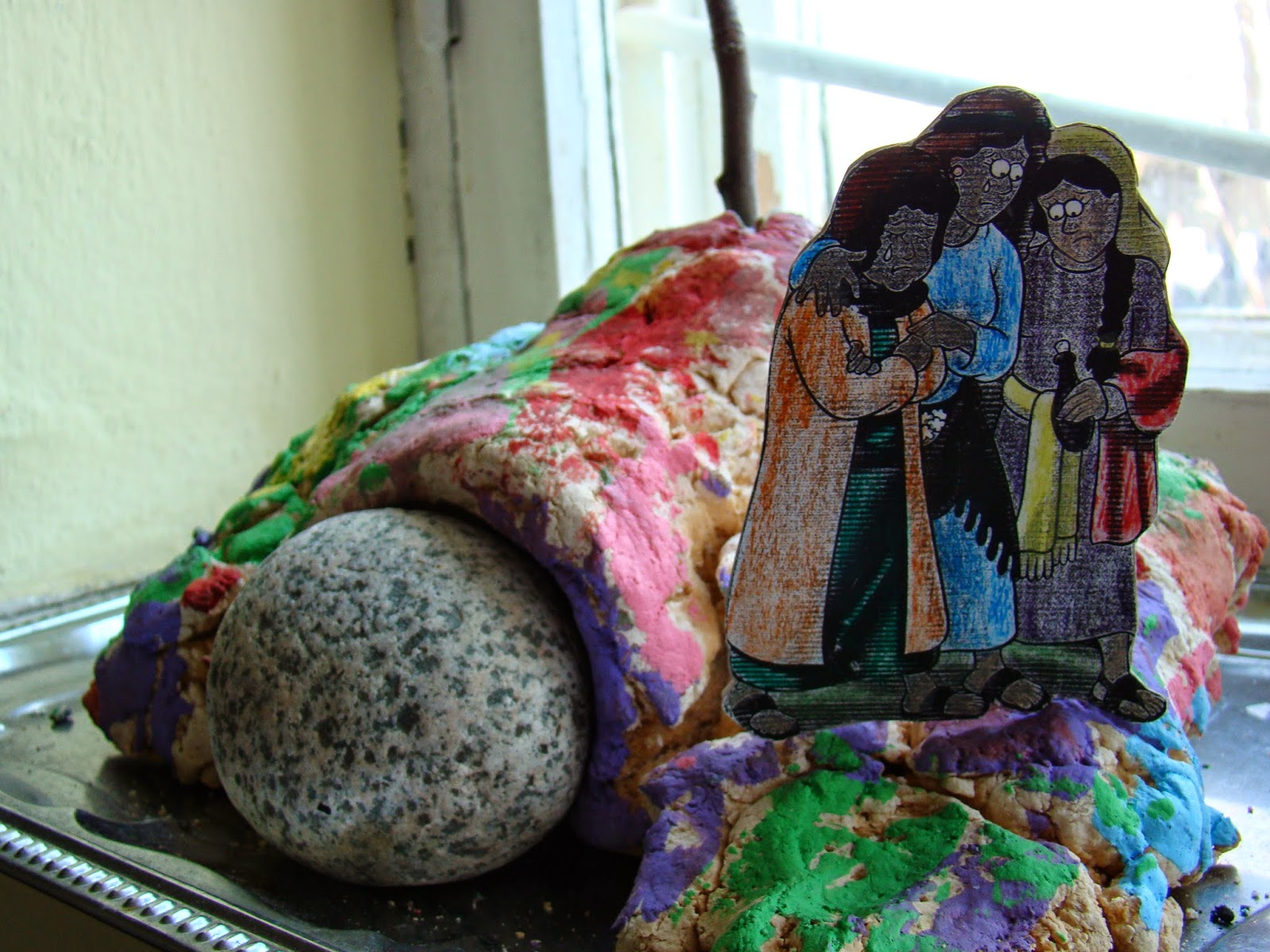 Today I heard a story that broke my heart.

We were outside washing carpets, my new helper and I.  With overturned tea bowls, we scrubbed circles in soapy lather, shoving the warp and woof this way and that, collecting clots of hair and fuzz.  Brown water and soapsuds ran in rivulets down the driveway.

This was her first week of work; the neighbor who’s been helping me for two years recently found out she’s pregnant with their fourth baby.  This new girl, Mikayla, the wife of one of James’ workers, is kind, cheerful, energetic - a perfect and timely answer to prayer.  She arrived just in time for spring cleaning, and we had been waiting all week for a warm day to tackle the carpets.
We squatted on our haunches in the driveway, scrubbing away, our backs warmed by the spring sunshine, and she told me her story.
I knew she had a two-year-old son at home, so I asked, innocently, if they wanted to have any more.

“Not yet,” she said, sprinkling more soap on the carpet.
“The doctor told us we should wait two years, and then we can try again.”  There was something I wasn’t understanding.

“When my son was a year old, I got pregnant again,” she explained.  They underwent the usual three ultrasounds throughout the pregnancy, but it wasn’t until the last one that the doctor noticed anything unusual.

“The doctor told us the baby’s head was too big,” she said. She pushed the broom in long strokes across the carpet, squeezing off excess water.  “He told us it would be born deformed.  That it would be very hard on us, and on the baby.  He said we should consider aborting.”

When I finally understood this last sentence, I stopped scrubbing and jerked my head up to look at her, my eyes widening.

“I cried, and said, ‘No, no, I won’t do it, I’ll have the baby, I want to keep it.”  Her arm moved in rhythmic circles.  “But then I went home, and my mom talked with me, and she said it would be really hard on me later and that I should do it, and my husband wanted to do it too… what choice did I have?”

“You were eight months pregnant already.”  She nodded.  I’m in disbelief.  I’ve never heard of a doctor recommending an abortion that late.  I want to ask whether they had tests done, whether they got a second opinion…

“So what happened?”  I already know I don’t want to hear the answer.

“They gave me some medicine.  And then - the baby stopped - moving.”  There are queer little stops in her voice.  She manages to get the sentence out, but only just.  There’s a long, heavy pause.  A huge hand is squeezing my heart.  “I was in the hospital for ten days, and I cried every day.”

I’m crying now, too, my face crumpled up, the tears running down.  Around and around go the tea bowls, upside down, all these rivulets of dirty water running off.  I’m silently screaming at God. This is upside down!  This is backwards!  This should never happen!  Why, God?  Why?

People here don’t like to display emotion, and my tears are embarrassing her, but she doesn’t say anything, and I wonder if they are validating her too.

Out loud, I say, vehemently, “That doctor put himself in the place of God.  He decided your baby shouldn’t have the chance to live.  That is God’s decision, not a person’s.”

“Yes. I know.”  She agrees.  She scrubs another minute in silence.  “But what could I do?  Everyone was telling me it was the only thing to do, and I believed them.”

There’s a long pause.  She stands up and reaches for the hose to flood the dirty water off the carpet.  I want a hose that will flood her bleeding heart with grace.

“So… did you have the baby?”  I almost can’t bring myself to ask.

“Yes.  They wanted to give me a caesarean but my mom went to bat for me and convinced them to let me deliver naturally.  It only took me 4 hours.”

And then?  And then what?  I simply cannot imagine the pain of knowingly delivering a dead child.  “And then… you… said goodbye?”  Now I’m the one who can hardly get the words out.  It’s hard enough just to breathe.

She nods, silently.  Water pours from the hose, washing away all the grime.

“I’m sorry,” I say, vigorously wiping my eyes on my sleeve.  “You probably don’t want to think about this or talk about it… I’m sorry.”

“Yeah, you don’t want to think about it, but of course, you do…”

A minute later, I find a way to encourage her, even just a little.  “At least you know he’s in heaven, with God, and he’s perfect.  He’s playing, and laughing, and happy…”

She nods again, meeting my eyes.  “I had a dream that my grandmother, who’s dead, came and patted me on the shoulder one night while I was crying, and said, ‘It’s ok, he’s with me, we’re looking after him.’”

Internally I’m having all sorts of theological difficulties (I have no idea whether her grandmother was a believer or not), but I don’t mention any of them… I just nod, and sniff.

“We’re going to give his one-year nazir (memorial service) this year….

We’re almost done with the last two carpets.  I take Ruby inside to change her wet clothes.  I pay Mikayla her first week’s wages, wishing I could give her the Gift without price that will soothe and save her wounded soul.  Please, Lord, I beg.  Please, one day soon.

I see our Easter mountain in the kitchen window, the cross tilting lopsidedly on the top.  Good Friday floods over me afresh.  It had slipped my mind while we were outside scrubbing. 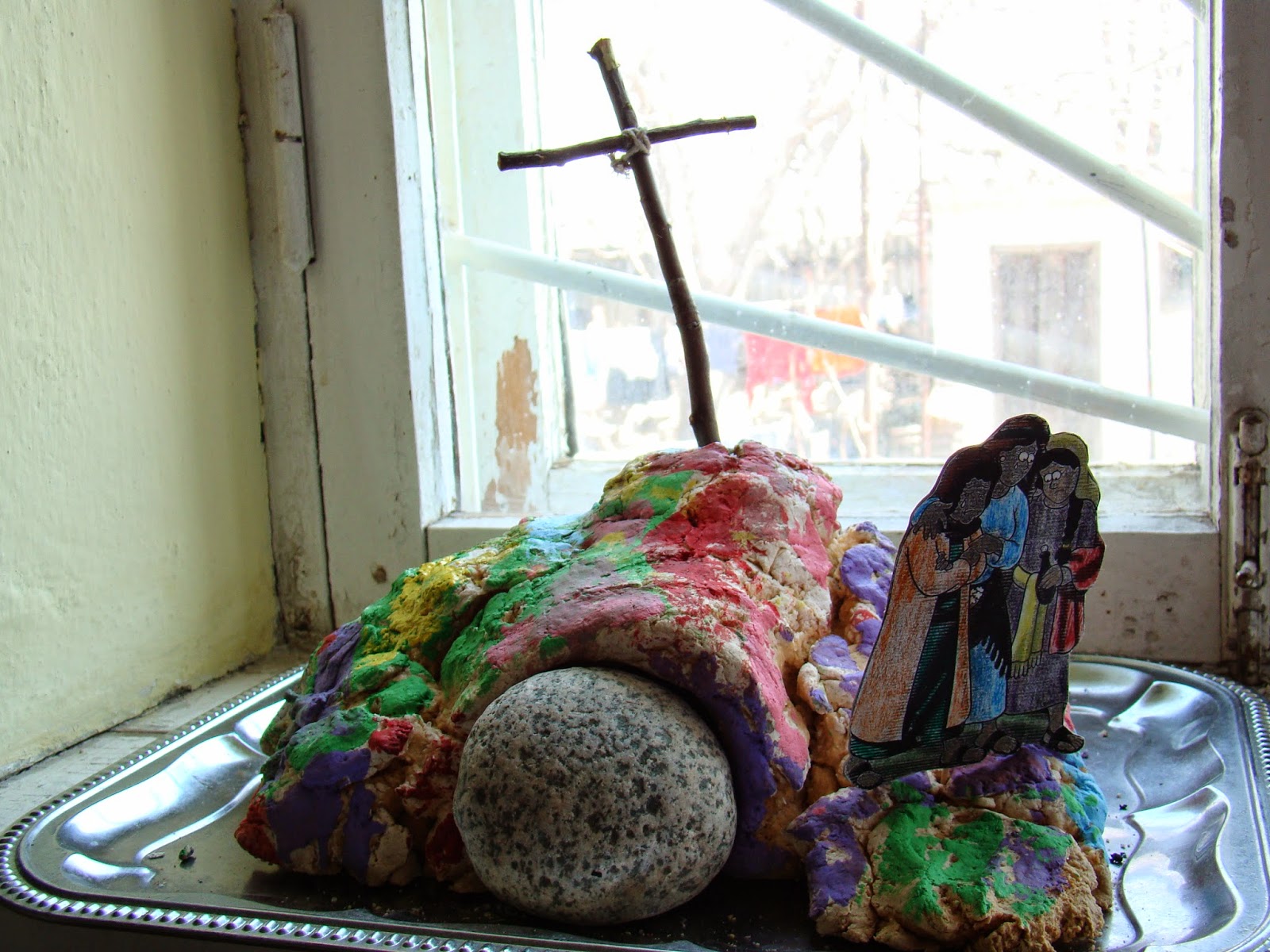 Into my mind floods a vivid memory of walking through the Good Friday story this morning with the kids, and how Ben had to get the hammer so I could tap the nails through Jesus’ pierced wrist into the little apple-twig cross.  The boys went perfectly quiet while I did it, except for Ben saying mournfully, “I don’t like this part, Mommy.”  Will’s eyes were wet.

My stomach twists, remembering. What you had to go through for us, Jesus!  The brokenness you endured, so you could heal ours.

The empty cross is dark against the window.  The women are weeping as they leave the tomb.

It’s Good Friday.  And my heart is breaking. 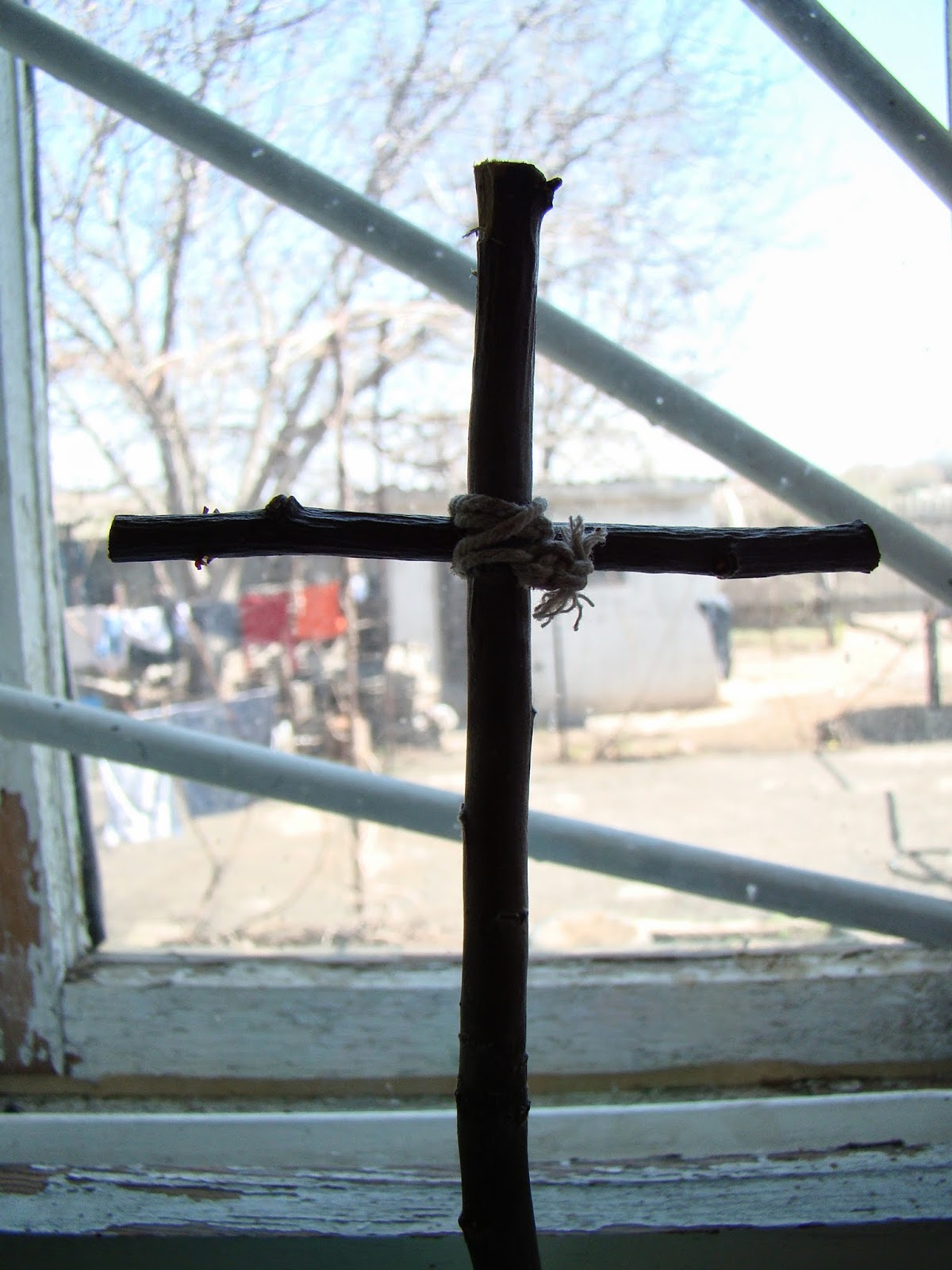 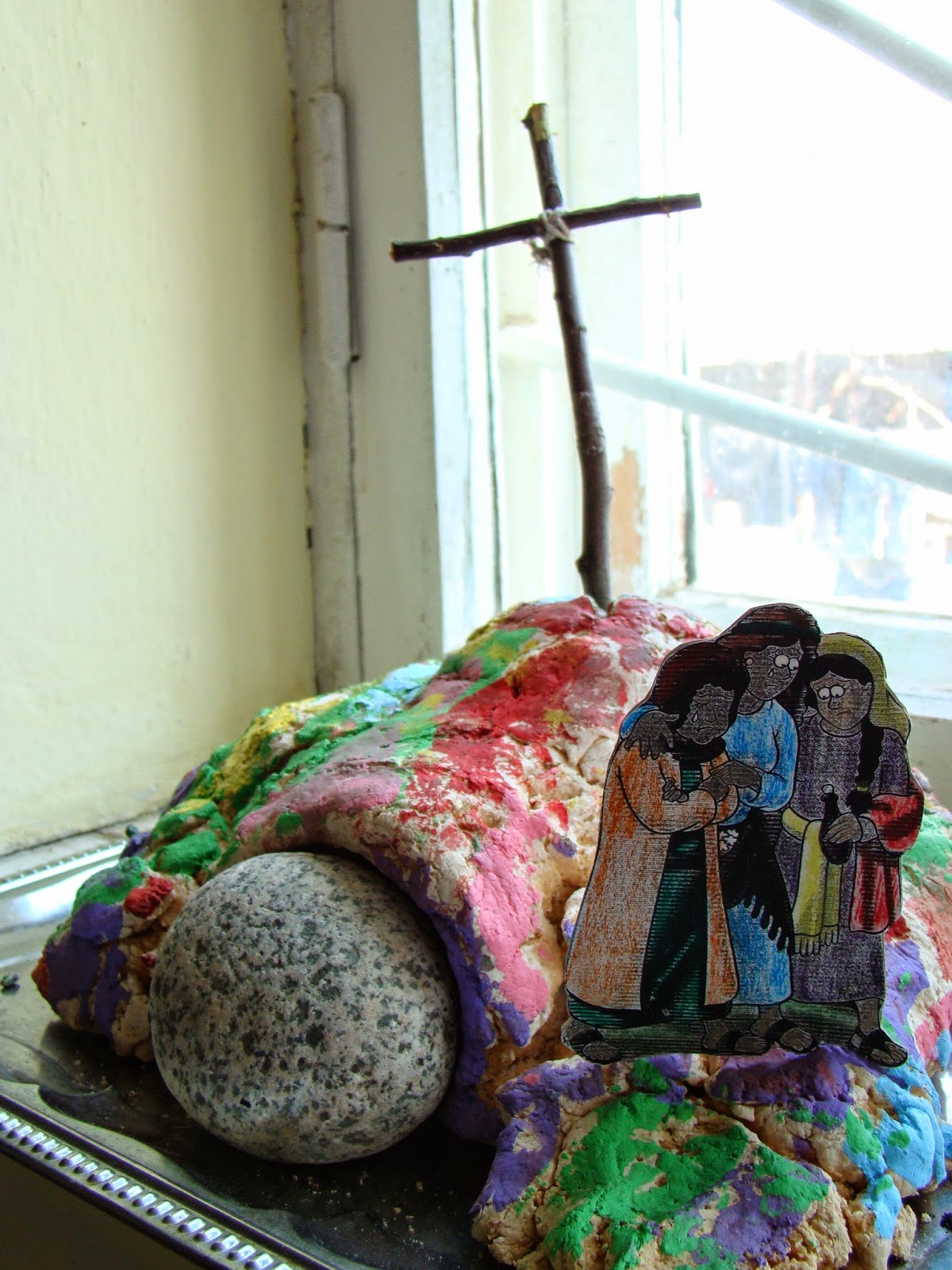 But.  Sunday is coming.  There is hope.  Hope for all the brokenness.

And suddenly, I’m flooded with a rush of gratefulness: that we ourselves were broken, but are being healed.  And that we get to live here, in this broken place, next to broken people, with Sunday’s healing hope inside our broken hearts. 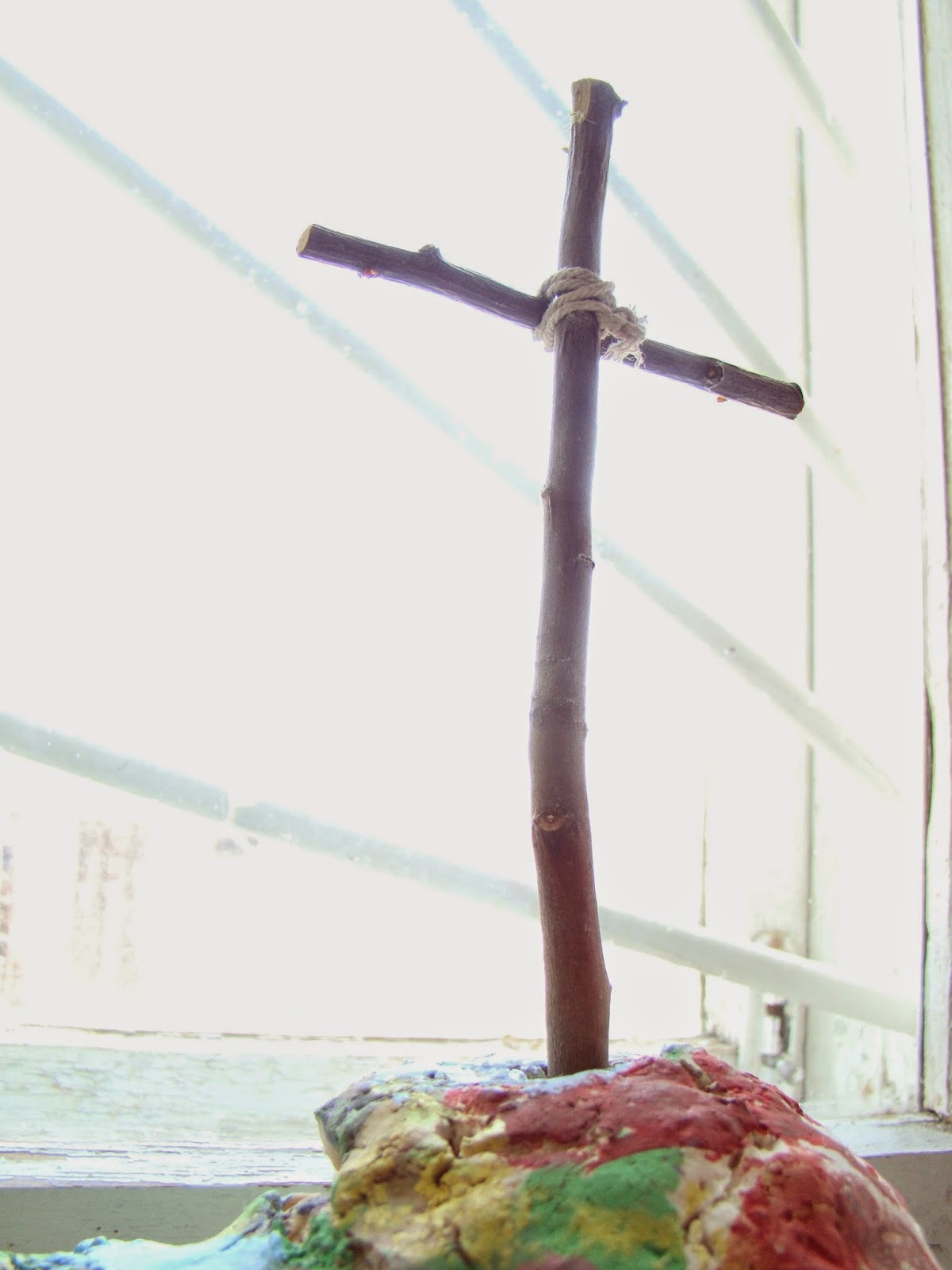