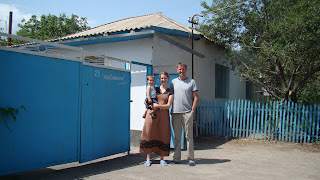 Us in front of our new house in Red East 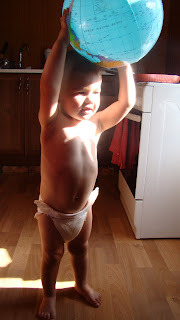 I can’t believe it’s already been two weeks since we moved into our new house in this little town called “Red East”.  I wanted to blog sooner, but the dial-up connection we have to use is painfully slow, so uploading anything takes a year and a day.  We’ve been having lots of adventures buying things for our house, meeting our neighbors and getting to know our new town.  Among the more interesting stories are the high chair saga I’ve posted below, and the story of my day yesterday which I’ll tell you now.

So, our teammates who’ve been living here for 8 years keep asking us if we’ve had any visitors yet.  Up until yesterday, the answer was no.  Yesterday at 10am, there was a knock at our gate, and in walk two sisters, one of whom we met with her family while out on a walk a few evenings ago.  She had brought along her older sister for moral support and they came to “show me around town”.  While they were at my kitchen table talking and eating snacks, there was another knock at the gate.  It was a woman I’d met briefly at the shops, who needed me to translate the directions for her ready-made Tiramisu kit!!  Of all things.  While we were standing in my gate doing that, 2 more ladies walked by, and one of them has been asking me to come to her house to see her curtains (presumably so I can get ideas for mine), and they stopped and chatted and examined the Tiramisu kit, etc, etc… Grand central station.  My visitors have finally arrived.

Back to my first guests…  Aynora, the younger sister, is 23, married with a 2-year-old, and her older sister Salima is 25, with a 5-year-old and a 2-year-old.  So my first thought was, “Oh yay, more young moms with kids, just like I’ve been wanting to find!”  As the day went on, however, I began to realize I still need to be on my guard.  While walking from my house to Aynora’s house to Salima’s house and back to my house, our conversation ranged from what we were doing here, to what was in my fridge (they had never seen cauliflower before, and it caused a big stir—they wanted to taste it, said it tasted like cabbage, and after asking how to cook it they decided to take some home with them to try it themselves.  I thought Salima would just break off a little piece—she took three big chunks!), how to stay thin, where and how we get our money, music in all its various forms (including an impromptu performance by me which they found highly amusing (I’m not sure why), to the character of our respective husbands, and how Salima’s husband needs a job and whether or not my husband would be willing to employ him (we returned to that subject several times).  By the end of the morning, I was feeling a bit dizzy, and was glad to come home to make lunch for James.

They showed up again in the afternoon at 3:00 on the dot, which was when I told them I’d be up from my nap—I wasn’t, actually, and they woke me up by banging on my gate and calling my name loudly for 10 minutes, which is what you do here when you want someone.  They sat for another hour drinking tea and eating snacks, and examining everything in my house (that I would let them handle)… I began to feel a bit invaded, and was glad when they finally left to go to the bazaar.  Please ask that I would be wise as a serpent and harmless as a dove… these two girls will be great relationships in the sense of spending time with other young moms and possibly doing a music class with them and their kids, but they do seem needy and a bit too curious, and we’re always wary of people here wanting to get as much out of the “rich” foreigners as they can.

Praise God we're settled in our new home and feeling so blessed to be living in this peaceful little town!  There are 26 different nationalities living here (in a pop. of 4000!), which makes things very harmonious and multi-cultural.  Please ask for open doors into homes and hearts, and a few solid healthy relationships before we head back to NZ in September.