a drop in the bucket

My youngest turns two tomorrow.  In a month, my oldest will be four.  Four years is a long time.  I spent four years in high school, another four years in college.
And now I’ve been a mother for almost four years. 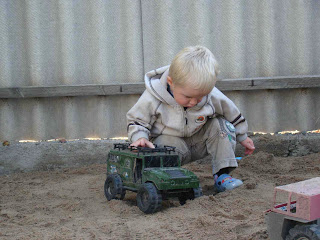 In high school and college, with each year that went by you felt like you had it figured out a little better, and by the time you graduated you were top of the heap.  All those little puny freshmen looked so inexperienced and immature - you had it “sussed” (Kiwi English for “figured out”).  You could show them a thing or two.
As a mother?
After four years, I feel even smaller, even more like a beginner, even more humbled and overwhelmed than when I started.  Bringing William home from the hospital, I was filled with joy and confidence.  I was made to do this, I thought.  My body was created for this - I’m a natural.
That lasted for a while… motherhood was golden.  Piece of cake.  I loved it.
Then William turned two.  The week before his second birthday we had our first screaming knock-down-drag-out fight, and panic filled my heart: Who IS this kid?  This isn’t my son!  What do I do NOW?
He used to get so angry when I punished him - I mean, absolutely kicking-screaming-furious.  He still sits in stubborn silence, convinced he’s right, refusing to answer the simplest, gentlest question.  His craving for fairness right from the beginning has kept me accountable to never discipline him in anger - he simply will not respond.  Not until I calm down, pray for love myself, speak in love, pray out loud for him to want to ask Jesus for help, and walk him through asking Jesus for help himself, do we finally get somewhere.   It’s extremely humbling, extremely frustrating, and extremely good for me.  I’m so much more aware of my own sin than I was four years ago.  Nothing like being held accountable by your three-year-old! 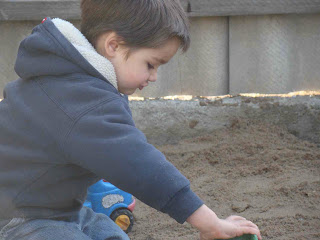 Now, looking at his fourth birthday next month, instead of feeling like I’ve got it “sussed” after four years, it’s like there’s this  massive chasm yawning before me of everything I don’t know, everything I haven’t experienced yet, all the milestones yet to reach… After four years, even with all my mother’s intuition, I’m just barely beginning to get to know my son.  Just barely scratching the surface of who William is.  There is so much down there - he runs so deep.  I’m driven to prayer, again and again - O Lord, help me understand him.  Help me love him even when I’m angry with him.  Help me delight in him.  Help me shepherd his heart, not just demand different actions that please me.
And Benjamin?  I blinked, and two years went by.  He’s completely different from Will.  He has completely different needs, loves, hates and frustrations.  He is a ball of energy where Will is sedentary, talkative where Will is contemplative, physically in-your-face where Will demands his space.  Ben wants to be outside, Will likes to stay inside.  Ben starts climbing, Will says, “Get down, you’ll fall!”  Will wants to sit and watch television, Ben gets bored after 10 minutes and looks for something to throw his body on, in or over.  Ben has a hotter, more explosive temper and more of a showman’s streak, but a much quicker turnaround time.  They are totally different.  Hardly anything I’ve learned with Will applies with Ben - I’m starting completely over from scratch.  Yikes.
So much for four years feeling like a completed length of time.  Four years is just a drop. in. the. bucket.  Really. 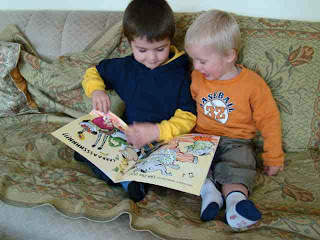 On Sunday, we listened to a great message on parenting.  After sharing some anecdotes, the pastor invited his two grown daughters (ages 20 and 18) to the mic to share their thoughts on godly parenting.  Both girls sounded articulate, genuine, not nerdy at all - their voices were beautiful.  And they talked about Jesus more than anything else.  Everything they said related to loving Jesus.
They talked about learning the fear of God from their parents - modeling  seeking God as a family on financial issues, relationship issues, decision-making - how Jesus was the first person their parents sought for everything, and so that’s automatically where the girls go now for advice: to Jesus.
The girls never thought “Family Night” was cool growing up - all their friends teased them about it, and they had to miss out on study dates, etc - but those same friends joked later that they thought of ringing the doorbell to interrupt “Family Night” and join in.  Both girls said, “Parents, it’s ok to make your kids do things they don’t want to do!  I used to gripe about having to ride bikes and play games with my brothers, and now we’re best friends.  Your kids will thank you for the memories and relationships when they’re older.”
They talked about learning how to spend time with Jesus from an early age, starting with Bible DVDs or tapes, and moving on to reading the Bible for themselves, and how their Dad or Mom would ask them later what they read and what they learned, what Jesus said to them… and so now, they not only understand how to spend time with Jesus, but they love doing it and their day isn’t complete with out it.  (I was definitely in tears by this stage.)
I looked over at James through my tears, and said in a half-whisper, “Oh that our boys would talk about Jesus like this when they’re 20 and 18!” 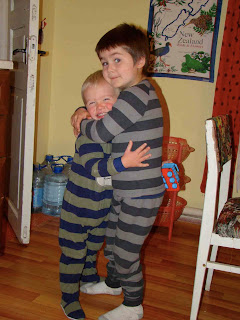 A while ago I started a “Jesus box” for William in the mornings, with Bible story books and paper to color with, but he never did much with it because it wasn’t specific or directed enough.  So after listening to Sunday’s sermon, I put The Jesus Storybook Bible CDs on my iPod, and yesterday when Will woke up, instead of just having him look at regular books until breakfast, I gave him headphones and turned on the Storybook Bible.  Afterwards at breakfast (upon request) he told us the entire story of how Isaac was the son of the promise, and how Abraham almost killed him, but God provided a “wam” stuck in the bushes so Isaac didn’t have to be killed.  (The first time he’s really gotten that story!)  When James asked him who the “ram” was that God sent for us so we didn’t have to die, Will immediately said, “Jesus.”
Today Will woke up a bit later, so he came straight in to eat breakfast.  But the first thing he said afterwards, still in his PJs, was, “Mommy, can I go listen to Jesus?”
Music to my ears. 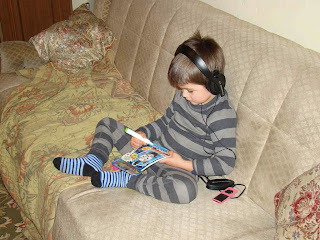 If I do one thing in my 14 remaining years with Will and 16 years with Ben before they leave for college, I want it to be this: showing my sons how to love Jesus.  How to spend time with Him.  How to listen to Him.  How to hear His voice.  Who cares what homeschool curriculum I use, which continent’s material I focus on, how many languages they learn, how many fieldtrips they take or educational toys they have - if they know who Jesus is, that He loves them, and how to love Him back, I’ll consider it a job well done.
Posted by Carolyn at 11:08 PM