I needn't have worried. 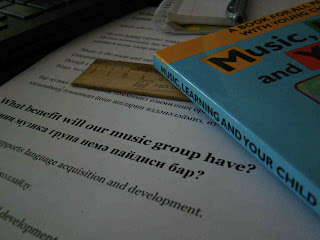 Isn’t God always that way? Doesn’t He make a habit of answering “above and beyond all we could ask…”?

Thankfully my tutor's mom kept her promise to come and help, although she was 20 minutes late and one of the kids arrived 15 minutes early! So then I had to figure out what to do with this little girl until other kids came (and since it was the first class I wasn’t even sure there were other kids coming…). And she’s been to our house before so she immediately wanted to play with Will’s toys, and threw a sulk when I said “not today”… they eventually wandered outside to play for a few minutes, and after my helper arrived we waited another 10 or so minutes to see if any more kids would come, and I thought, Well, I did say it would be worth all the planning even if just one kid shows up, and here she is! 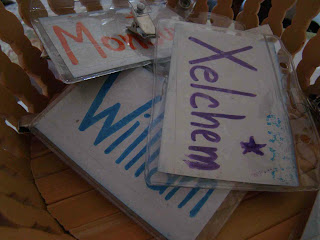 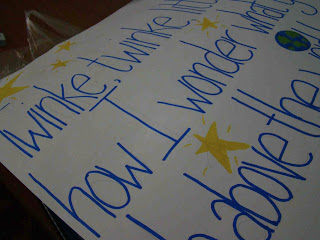 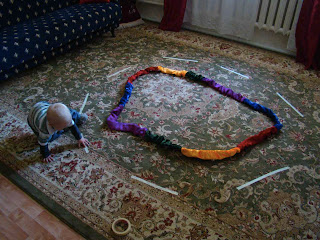 So we went in and started class with me, my boys, my helper, this little girl and her teenage sister who brought her. Before we had gotten through the first couple songs, the little girl’s grandmother arrived with her little brother, bearing a bunch of garden flowers and a bag of pears for me! She was the only one who thought to do that—one more thing I like about her. (She looks you in the eye like she’s got nothing to lose. And so she hasn’t— one of 7 siblings, never married, in her 60s, had a solid career of 40 years as a pediatric nurse, adopted a son and now has grandchildren, and is also bringing up her teenage niece, the daughter of a good-for-nothing sister. She’s different. I really like knowing her.) 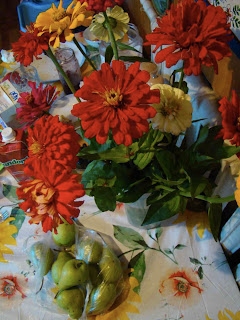 And then, shortly after she arrived, my house helper and her 3-yr-old came in, bringing their neighbor with her 3-yr-old daughter, who I’ve never even met! Bless her heart, the neighbor looked none too sure of herself and probably hadn’t the faintest idea what to expect of this mysterious kids’ music class at the foreigner’s house… 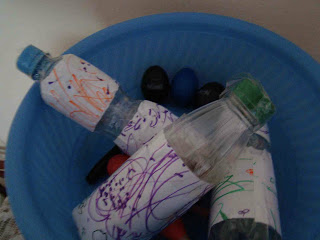 By this time we were about a third of the way through my plan, so we backed up a bit and included them and I finished my plan and sang the Goodbye song, and the latecomers said, half-jokingly—“What!? That’s it?” Which made me feel good—at least they were having fun! So I sat and took down their names and put on some music for the kids to play, and pulled out the Rainbow Ring again, and someone found the instrument box… and they stayed until close to 6:00!! So if the goal is building relationships, I definitely think that’s going to happen. These people come late and stay late. Good to know. 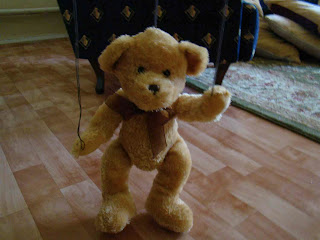 Praise the Lord for 4 local kids for the first class, and the promise of potentially 2 more next week… with my kids that makes 8, a really good size! More than I’d hoped for. Like I said…

“…more than we could ask or imagine.” Silly me.

“The only prerequisite [God asks of us] is our complete inadequacy.”