Here are some pictures from about a month ago of the boys "playing" together in New Zealand: 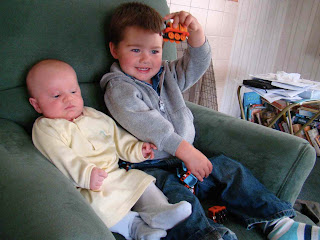 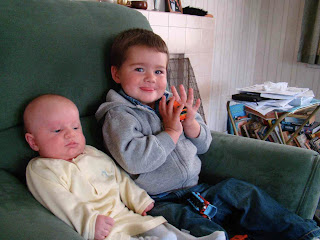 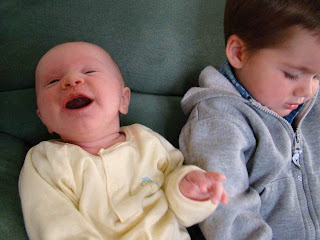 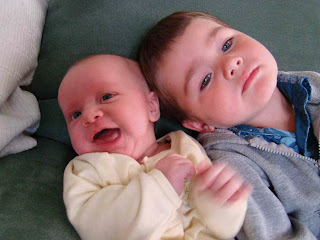 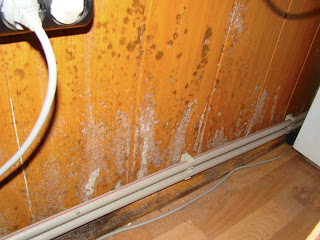 This is the wall behind my kitchen cabinet and fridge. The room we’ve made into our kitchen wasn’t originally intended to be a kitchen, so all the steam has nowhere to go. After a couple months of cooking happening in there, the wall looked like this when we got back. I’m a little worried, because I know mold isn’t very good for you, and we all spend lots of time in the kitchen because it has our only table. Any suggestions on how to wage war on mold?

Our Constipated Infant-- Loose At Last!

I know, I know—too much information. But seriously, I was starting to get a bit concerned. Ben hadn’t pooped since last Sunday, which makes this Day 8. I’ve been bracing myself for a massive blow-out: switched from cloth to disposable diapers yesterday, in the hopes of being able to throw the whole thing away after it happened… and nothing happened.

And then tonight—he pooped! While I was feeding him before bedtime, with no drama whatsoever. And it was just a normal poo, as if he hadn’t been storing it up for over a week… where did he put it all??? 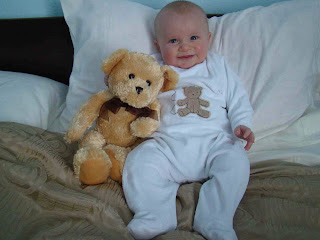 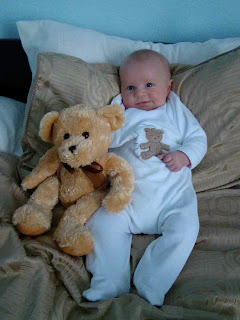 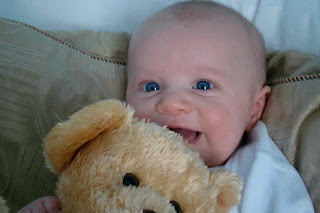 It was a grueling trip from Thailand to Central Asia, including a stressful, rushed taxi ride to the airport only to find our flight was delayed 1.5 hours; then 7 hours on the plane, plus another 2.5 hours crawling along a very bumpy road out to our village—we arrived at our house at 6am after traveling since 2pm the day before!
But 3 days later, we are all sleeping well and the boys are settling in very well to this house… Will loves all the big rooms, and recognized his room and his toys right away—in fact, the morning we arrived he was raring to go (having slept on the plane and in the car), and we were utterly exhausted. So I tried to get him to lay down on his bed with me and go back to sleep, but he only stayed down about 30 seconds and then popped up to play again. I just kept laying there on his bed, too tired to move. As I drifted off to sleep, I was aware of him planting a kiss on my head—“Night-night, Mom!” – and getting his dog for me—“Cud-doh dog, Mom!” My toddler is tucking me in, was my last thought. Should I be worried? When I woke up at 10am (still in his bed), he was fast asleep next to me. Guess not.

Our neighbors have welcomed us back with open arms. My sweet language tutor from the summer came over on Saturday, our first day back, having seen James walking to the shops. It “just happened” to be her last day home before leaving for another 2 months of school—it was SO wonderful to see her. She oohed and aahed over Benjamin, and then did the requisite “Thew! Set (ugly)!” to the side afterwards, to ward off the Evil Eye. My heart just breaks for this superstitious culture.

That same evening Zoya, my 50-year-old friend down the road, stopped in, just as we were sitting down to scrambled eggs and toast. While she was still standing in the doorway, right after exchanging greetings, she told us her husband passed away of a sudden heart attack on October 18, eight days before Benjamin was born. He was only 52. She has 3 grown children and another 10-year-old daughter, Rosa, at home. She said Rosa just wanders around all day crying because she misses her daddy. “Kandak kiliman?” she said sadly. “What will I do?”

Monday morning our elderly next-door neighbors stopped by, with some bread and a gift for Benjamin, and chatted away to us like they’d known us for years and we’d been away for much longer than 5 months. They are so sweet—they’re like William’s local grandparents. They said we should call Benjamin the name of the first Muslim (whose name apparently also begins with a B)… we chuckled politely and noncommittally… neither of us felt ready to dive into why we wouldn’t name our child after a Muslim.

Today I went out with the boys for the first time by myself, all bundled up. It’s not nearly as cold as I expected, with warm sunshine, so it’s slushy and the streets are fairly clear. It looks like we’ve missed the worst of the winter, praise God. The shopkeeper ladies were thrilled to see us—my tutor’s mother was one of them, and her sister-in-law, both exclaiming over how much William has grown and how cute Benjamin is (“Thew! Set!”), and how much he looks like James… it’s like coming back to relatives, and we’ve only known these people a few months. Amazing.

We are thrilled and relieved to be back, and have been showered with love from teammates and neighbors alike. Our new teammates (who stayed in our house while we were gone) bought us groceries and brought dinner over on Sunday night. Their little 18-month-old son and William had a great time playing together—I hope they’ll be good friends.

Pictures to come, when I can resize them so they don’t take hours on our dial-up. Thank you for praying for our transition! Praise God it’s all gone so well already!
Posted by Carolyn at 5:03 AM 2 comments