When we moved into this house, it was a mess.


The owners have a passion for fruit trees and were lavish in their planting: rows of pears all around the house perimeter, six huge walnuts by the back fenceline, tall leggy apricots in the side yard, cherries by the abandoned chicken coop.  The crowning glory is the small apple orchard that fills the backyard: thirty small apple trees planted in narrow rows with sturdy low-spreading branches. 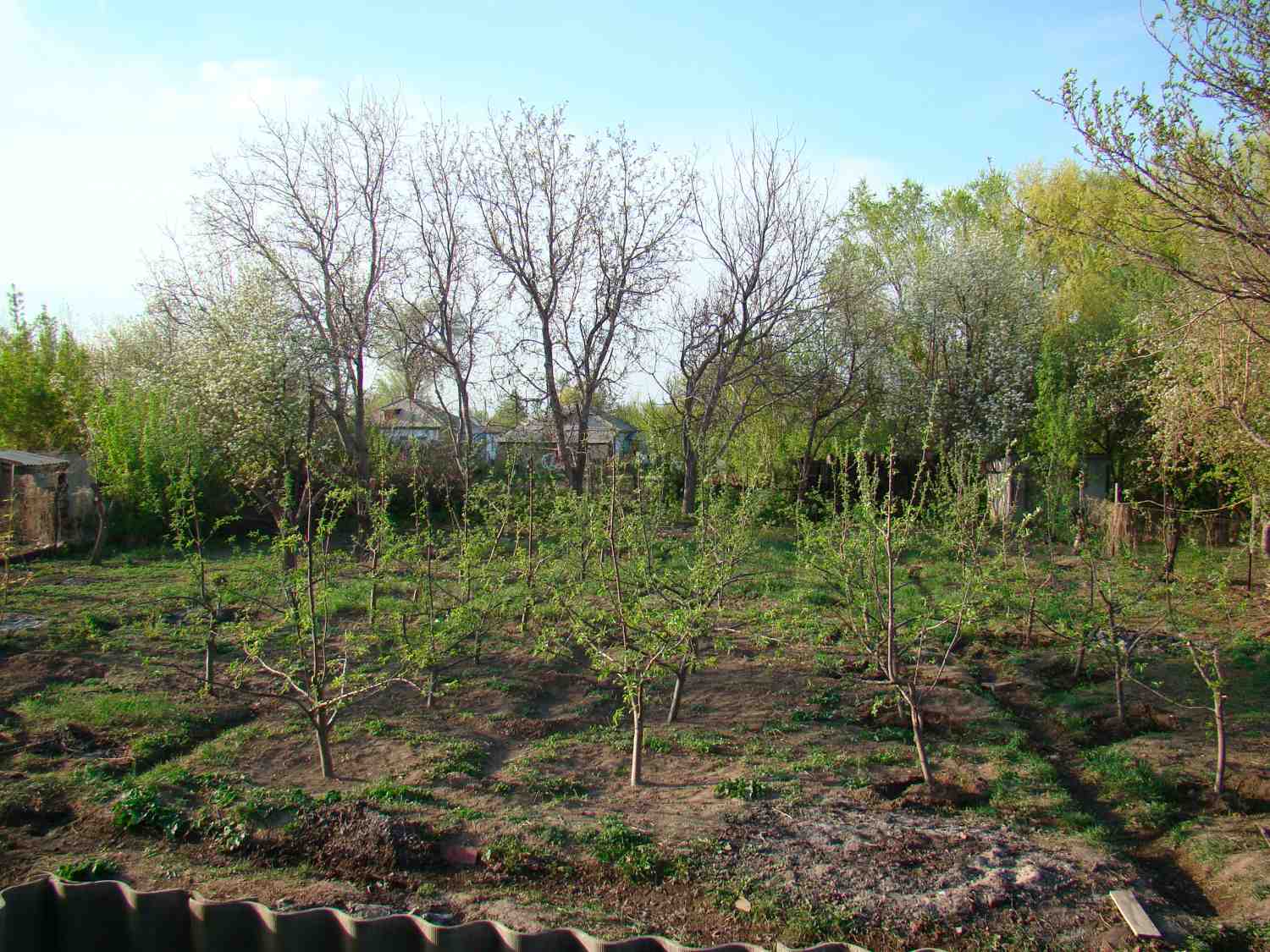 My husband, the farmer, was thrilled.  I, the musician-bookworm, was overwhelmed.  “It’ll be your thing,” I tell him, warning.  Abdicating.  What is this choking thing in me that makes me hesitant to try anything I don’t feel I can succeed at?
None of the trees had been pruned or tended in several years, and when we moved in last summer and looked out our back porch windows, all I could see was a jungle.  Where are the kids going to play? I wondered.  And then, with a sinking heart, How am I ever going to deal with all this fruit?
Nothing goes to waste in this culture.  Letting fruit drop off trees and rot on the ground because it’s too high to reach easily (or because you just don’t have the energy) is frowned upon.  There’s always the option of opening the gate wide and letting the neighbors in to pick (which I still might do), but all my overwhelmed-ness hadn’t counted on one thing: the rest that pruning brings.
Last fall, James cheerfully went out and bought a chain saw.  Every day when he came home from work, he went out to the backyard and I heard the engine revving its masculine roar while I cooked dinner.  He lopped off heaps of branches, whole tops of trees, even whole trees in some instances where they were half dead or just too crowded.  Our neighbors happily dragged away mountains of branches to feed their cavernous, ravenous bread ovens, leaving us with…. Space.  Open sky.  Lopped off trunks pointing stumpily in all directions.  Breathing room. 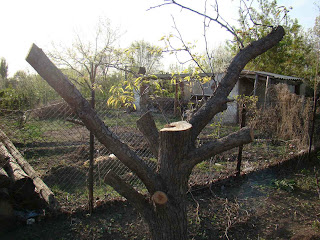 Part of me was happy about the tidying of the jungle; part of me grieved the amputations.  The part of me that wants to be a competent local housewife was thrilled to realize that ferocious pruning meant a much smaller fruit harvest this year… less for me to deal with!
And then yesterday I made a startling discovery: if a tree is alive, it never stops growing.  (It sounds so basic when I put it like that, but I just haven’t grown up aware of nature, and each discovery is astounding.)  Right through the thick, scaly bark of those lopped limbs, some as thick around as my calf, the trees are pushing out new life.  I had no idea trees do this.  Tiny green shoots struggle to emerge, their frailty emphasized by the girth of their home limbs.  How in the world are they strong enough to get through those barriers? I wonder. 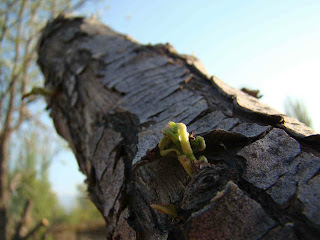 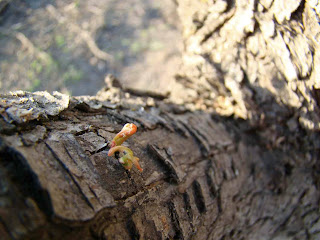 Just now, while I was peeling potatoes, I asked God if there’s anything he wants me to learn from this picture of new life.  Immediately, this thought began moving through my mind: “No matter how ingrained you think your habits are, or how neglected an area of your life may feel, or how discouraged you might feel that you’re not seeing growth, with my life in you, change is always possible.  I AM the growth-Author.  But - sometimes it might take some vigorous pruning to make way for new things.”
A mundane example popped into my head: I have never been a good flosser (of teeth).  My whole life, every six months at the dutiful and much-dreaded dentist visit, the hygenist would ask me that innocent and terrible question, “So, are you flossing?”  And I would always fudge and answer, “Weeeeelll… not every day (meaning, never)...”  So last year, my last year of my “twenties”, I decided to put “flossing” on Ann Voskamp’s daily “Do It for 100” form, along with “reading a verse with Will” and “get up before the kids to have devotions”.  And guess what?  I can count on one hand (ONE HAND!) the number of nights I missed flossing last year.  And my gums are pink and healthy and thanking me for it!  It took me 30 years to get around to making a new habit, and a whole year to hammer it in, but now I can’t imagine going to bed without flossing and if I forget, it feels weird.
Change is possible. 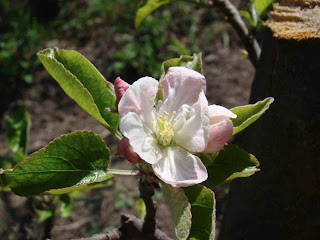 At a deeper level, I can feel new growth emerging quietly in my soul this spring.  As tiny and frail as those green shoots, it’s poking through nonetheless - the result of epiphanies from Transformed Into Fire and a new, quiet awareness of resting in God’s presence and receiving his love.  It’s not every day yet that I create the space and time for intentional communion, but it’s oftener than before.  I’m starting to feel my soul (not my body, mind you) longing to get up half an hour earlier, and sit outside under some of those breathtaking trees to listen and absorb God’s presence.
Maybe this will be the year of finally letting go of busyness and performance - with some vigorous pruning? - and allowing new green fronds of awareness to quietly lengthen into bloom.